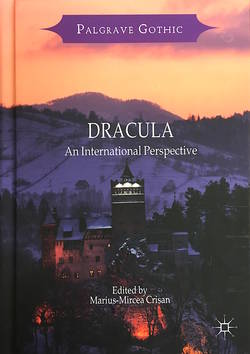 The first thing you need to do, before beginning to consult this book in any detail, is to re-read Bram Stoker’s Dracula. If you haven’t read it, this volume of essays will inspire you to do so; but you will enjoy the essays much more if the story is fresh in your mind.

The editor, Marius-Mircea Crișan, Associate Professor at the West University of Timișoara, Romania, has assembled an impressive array of scholars for this collection, published last year in the Palgrave Gothic series, books which deal exclusively with the Gothic genre.

The book is formed of a collection of 15 essays, all looking at Dracula from different perspectives. To begin with, there is a lot of useful contextualisation, examining not just the Dracula myth itself, but the whole concept of the exotic, the strange and the eerie. In their essay entitled “Bloodthirsty and Remorseless Fangs”, examining the short stories of Edgar Allan Poe, Lucian-Vasile Szabo and Marius-Mircea Crișan do an excellent job in exploring how these terrifying imaginary spaces evolved. Too much intimate knowledge of a place will prevent it from ever being depicted as evil and haunted; but some cursory knowledge is obviously necessary to give credence to the narrative. Poe, we are told, consulted several books and periodicals on East-Central Europe before committing pen to paper. As the authors note, “fantastic actions are placed in a fictive geography inspired by elements of real ones.” One is reminded of the famous remark of Robert Louis Stevenson’s (himself a creator of Gothic fantasy with his Dr Jekyll and Mr Hyde) that “There are no foreign lands. It is the traveller only who is foreign.” Nevertheless, this foreignness is essential. A reviewer of Dracula is cited by Szabo and Crișan as remarking that “the author seems to know every corner of Transylvania.” Of course he did not. But he managed to make his depiction seem convincing.

Such contexts are still with us. At the end of the volume, Carol Senf reminds us that we inhabit an age with an appetite for urban jungles: hence The Shining, Buffy the Vampire Slayer, etc.

It would take far too long to review every essay in this book. Instead, I have chosen one. Since travel writing is our business at Blue Guides, I was inevitably intrigued by Duncan Light’s “Tourism and Travel in Bram Stoker’s Dracula”.

One does not immediately think of Dracula as a travel book, nor of its protagonists as tourists. But Light, a lecturer in Tourism at Bournemouth University in the UK, manages to find many ways in which tourism plays a role in the novel. He begins by defining it for us, following the definition of the WTO:

Tourism is “the activity of visitors:; a visitor is “a traveller taking a trip to a main destination outside his/her usual environment, for less than a year, for any main purpose (business, leisure or other personal purpose) other than to be employed by a resident entity in the country or place visited.” It may seem obvious in a way, but it is helpful to have it set out like this.

Jonathan Harker travels to Transylvania for two reasons that can allow us to class him as a tourist. He starts out on a business trip and, as Light, points out, “the business traveller effectively becomes a leisure tourist once the working day is over. Thus Harker takes part in many of the performances associated with leisure tourism. He carefully researches his destination in advance in the same way that a contemporary tourist might consult a Lonely Planet or Rough Guide.” (I cannot argue with this, except to regret that no mention is made of a Blue Guide! A modern-day Harker on his way to this part of the world might well consult Blue Guide Travels in Transylvania.) Harker also has the typical prejudices of a tourist: he compares everything with home, often unfavourably, and (rather patronisingly) describes the natives as “picturesque”.

There are other sorts of tourism examined by Light. Health tourism (visits to spas and so forth) is one; political tourism (visits to the scenes of major world events) is another. He ends with “dark tourism”, which involves visiting graves, burial sites, battlefields, the sites of murders or other atrocities. Jonathan and Mina Harker may have revisited Transylvania on a quest for the grave of Quincey Morris (after whom they have named their son, in gratitude for Morris’s aid in dispensing with the dreaded Count). We do not know. What we can be sure of, though, is that Dracula has spawned a dark tourism industry of its own. Many of those who visit Transylvania today are doing it for the frisson of travelling to the land of the vampire.