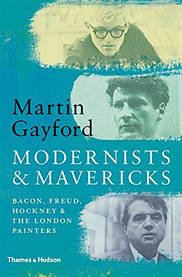 By Martin Gayford. ‘After the war, because everybody who was about had escaped death in some way, there was a curious feeling of liberty. It was sexy in a way, this semi-destroyed London. There was a scavenging feeling of living in a ruined city.’

This is the reflection of Frank Auerbach, one of the subjects of this absorbing study. Auerbach had arrived in London aged 16 in 1947. His passage to Britain from Germany when aged only seven had been sponsored by Iris Origo, well known for her sheltering of children in Tuscany in the war. His parents had perished in Auschwitz. It was understandable that he felt he was a scavenger and this might be said of many of the artists in this book, most of them figures marginal to society with a passion for a deeper understanding of reality that forced them to break through the barriers of conventional art. Auerbach’s friend David Kossoff put it well: ‘Nothing really begins to happen in a painting until you reach the point where conscious intention breaks up and ceases to be the thing that’s driving you.’

Gayford has already provided a detailed account of himself as a sitter for a portrait to the reclusive Lucian Freud (the acclaimed The Man with the Blue Scarf, 2010) so Freud and Bacon are presented here with authority. By adopting a chronological approach, from the 1940s through to the 1960s, and drawing on many notes and reminiscences, he presents a history of aesthetic struggle in which the personalities are almost as important as the art. One of the strengths of the book is the recording of many somewhat inarticulate attempts to describe what the act of creation means. There is a sense, encapsulated in the Kossoff quotation above, of breaking through to a higher state of being through the endless working and reworking of paint. The artist does not know how or why he or she has arrived at a masterpiece but recognises it when he sees it. There is as much destruction as creation, as rejected alternatives are scraped off in frustration.

Naturally many readers will be interested in the great names and there is much to enjoy. There is a particularly good section on Hockney, a close friend of the author, who was rejected by many of his contemporaries and their dealers because he did not fit into any recognisable category. As Gayford notes, like Hogarth, William Blake (a major exhibition of Blake opens at Tate Britain in September 2019) and Stanley Spencer, Hockney resolutely set out on his own path, although it was not until he arrived in New York that he found his personal and artistic awakening. He was drawn to the States for much of his working life.

Gayford is good on showing the impact of the arrival of the Abstract Expressionists, from their first London exhibition in 1956. This was the moment when the centre of the art world moved from Paris to New York. This left the London painters divided between those who followed the new trends and those who stuck to their own paths. It paid off for some. Francis Bacon’s Three Studies of Lucian Freud (from 1969) became the most expensive work ever sold at auction when it went under the hammer for $142.4 million in 2013. It is only a few artists who have the determination and confidence to transcend movements. I enjoyed the many dismissive remarks of even radical professors of art when their fledgling students upset convention.

This being London, it was inevitable that by the end of the book I began longing for some warmth, sun and blue skies in the paintings. In the many illustrations there is much to admire—some pictures that I would even have on my walls—but there was one painting above all that haunted me: Michael Andrews’ Portrait of Timothy Behrens from 1962, now in the Museo Thyssen-Bornemisza in Madrid. I knew nothing of the Norwich-born Andrews (1928–95). I was inspired to research him more fully, being drawn to his humanity, the sensitivity of his portraits and his continuous reinvention of his subject matter through to a period of peaceful spiritual landscapes. Sadly, only 250 of his pictures survive.

One bonus of this book is its readability across such a spectrum of different movements and personalities. Not least, it is a relief to be free of the jargon through which so many art historians attempt to show off their apparent knowledge. It will be hard to find a better introduction to the ‘London Painters’ than this one and it left me looking forward to reading Gayford’s more detailed studies of Freud and Hockney.